With Marta. Started grey and drizzly, but after Langham (11 am) it cleared up for the rest of the day. Still some mud underfoot, views good. 11.7 miles approx. A few hilly bits.


We set off from Whissendine around 9 30, and walked up past the church,  turning right on to Foxhills, and following the road round as far as Number 21.  The footpath runs alongside this house to a field, where we turned left.  There's a gateway on to the the road, but the path turns right and follows the hedge for a short distance before joining the road at a stile. We turned right along the road as far as a left hand bend.  At this point we continued straight ahead, on a bridleway leading to Langham.

By now we were both wearing waterproofs as the drizzle persisted. The hedge was on our left for a while, but at the summit of the track it changed to being on our right.  The views here are said to be excellent, but the mizzle made them a little hazy today.  We used John Williams' book and the OS map and found the path without problem. At one or two points along the way the waymarks have faded or become overgrown.

There is a junction of bridleways at the end of the field, and here we turned right, with the hedge on our left.  In the next field the path goes over a stile after a gap in the hedge on the lef. We followed the path alongside a deep ditch on our left.  We crossed a plank bridge and then turned right when a hedge blocked the way, turning left over a briidge in a short while cutting off the corner of a field before following the hedge and waymarkers to reach Manor Lane in Langham, via a stile.


Well, to be truthful we were delighted to be able to buy an early coffee in the pub - the landlord took pity on our drowned rat appearance. 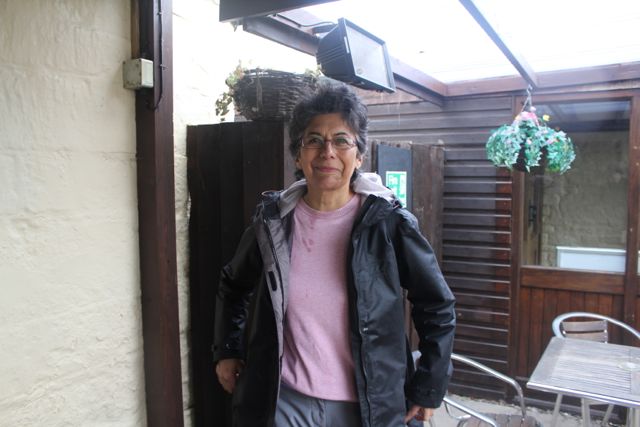 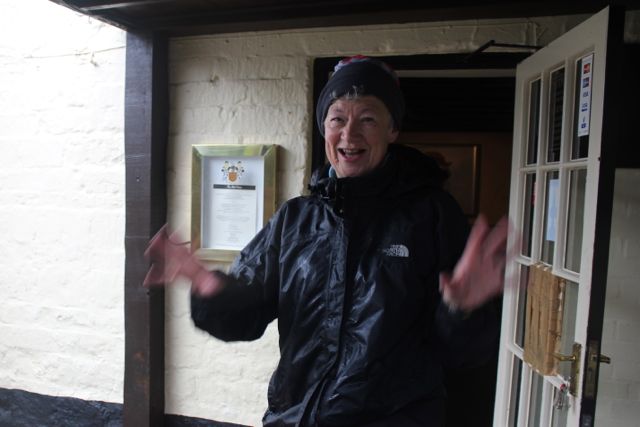 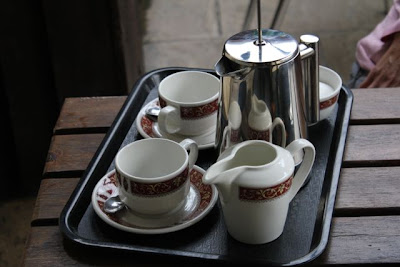 The rain gods smiled on us and by the time we left twenty minutes later the rain had stopped.


At the end of Church Street we crossed the main road, turned right for a short distance before taking the bridleway towards Braunston, which leads off to the left.  The path climbs up hill following the left hand hedge and turning right to walk around the small wood near  Mill Hill.

At the end of the wood we turned slightly right and continued up to Manor Lane, a small road which leads into Barleythorpe.
We walked down into Barleythorpe, and to the road, then turned right, along a pavement until a stile led into a playing field on our right. After this we walked along the edge of Catmose College, and through Rutland Care Village, before coming out close to the level crossing near Oakham Station. 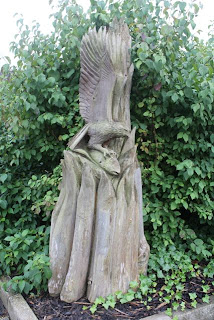 We had our lunch stop at the Castle Café in Oakham - a very good broccoli and stilton soup.  It was still a little cool and damp for sitting out.
We left Oakham on the road towards Uppingham and Kettering.
Shortly after the bridge our path turned off to the left towards Egleton, crossing muddy fields which could have been a lot worse!  Of course, since the 2000 edition of the booklet, and the publication of my OS map, the bypass has been built.  It's on the newer maps, and doesn't complicate the route.

Through Egleton, we turned right along the road to the A 6003.  We crossed over the road and then the railway line to a path which leads up hill with a hedge on the left. 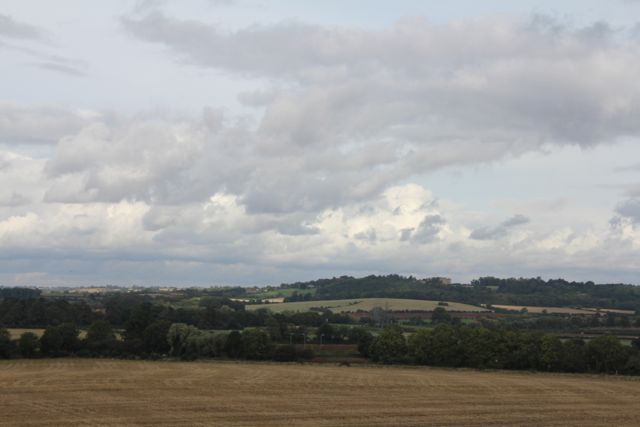 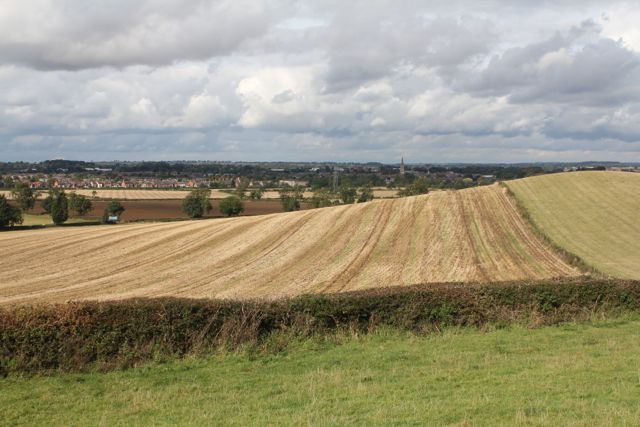 At the second gateway we cut across the field slightly, joining a track past Brooke Covert East.  Soon after this the track bears right, but we took the route through a gate to the left.  The path goes downhill over a small bridge and past Bridge Farm into Brooke.
We walked through Brooke, turning right at the junction.  We passed some earthworks on our right, and a dovecote in the grounds of Brooke Priory - a house on the site of a 12th century priory.
We took a footpath in the field opposite the priory, and walked alongside the stream, the Gwash.   After a few hundred yards the path crosses a footbridge to a bridleway.  We went across the bridleway through a gateway and over a field diagonally to the left hand hedge. The path is clearly marked into Braunston.


And here is Braunston Church again 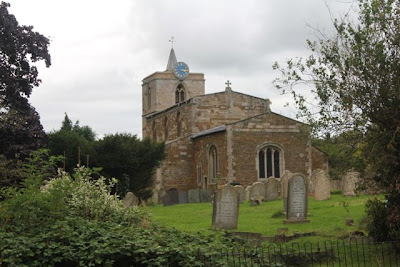 
Map and details
Posted by aliqot at 9:32 AM