With Marta.  Fine, sunny, but cold to start with.  Some mud underfoot. Luckily I remembered the way through Clipsham Quarry.  Only other small problem was on the way to Tickencote where we missed a turn to the right, but were able to correct easily. Lunch at The Plough in Great Casterton. 14 miles including walk to Yew Tree Avenue.

The first two miles from Normanton Car Park on Rutland Water were very simple - follow the yellow brick road, well, the tarmac path, past the café,  past Normanton church and the back entrance to the Normanton Park Hotel,  and carry on across the dam. Blue sky, blue water, and a chilly north wind.  A few cyclists, loads of sheep and the guys inflating those see-through balloons you can be strapped in to roll down the grassy slope behind the dam.

Instead of going through the gate at the end of the dam path, we followed the field edge round, almost turning back on ourselves.  We walked along the edge of the wooded area, and shortly after a couple of trig points, or similar objects, there was a stile on our left which led into a field.  We spotted the Rutland Way signs for the first time today - and on the stile.
The signs were easy to follow from this point, leading over fields and through some woodland, until the path emerged into Nook Lane in Empingham.  Nook Lane leads to the main A 606.  We crossed over to walk past the White Horse pub and along the road through the village.  The church was down a small road to the right as we walked straight on.

Just after the end of the village, very soon after Mill Lane, the footpath goes away from the road, up through a short stretch of woodland - Chapel Spinney.  A little further along the road after the turn there's a convenient bench for our first stop of the day - a little chilly in the shade, so we didn't linger longer than the few minutes needed to top up the caffeine level.

The path came out of the trees into sunshine and continued along the top edge of several fields.  Empingham was now a cluster of houses and the church behind us.   We passed a spinney on the right, and continued to follow the path. There may be a waymarker that we missed, but we fought our way thorugh an overgrown section and came out on the concrete path leading towards Tickencote Lodge Farm.  We had just walked round the two sides of a triangle instead of the hypotenuse - give or take the accuracy of the right angles.


We turned right and walked down the track until we met the Rutland Round waymarker pointing back to where we should have walked.  Close by was a stile into the next field of recently cut hay, which we crossed diagonally (just south of east) to the next yellow post just before another farm house.

We followed the signs round the house and on to a small road north east for a short distance, before entering a couple of fields and walking in the same direction, the turning slightly to the right.
We crossed another small road towards Tickencote Hall, and had to brave this signposted danger: 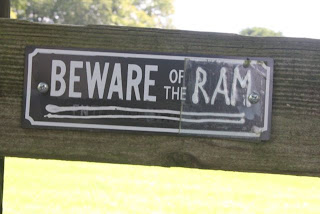 He seemed to be dozing in the shade and showed no interest in us.

The path goes past the church of St Peter, which is small but impressive. It was restored at the end of the eighteenth century, but is considered a fine example of a Norman church.
We walked through the village to a sign and short section of path which crosses a field, then emerges on to a road near the OK Diner, then goes under the A1 and into Great Casterton.  The Plough Inn is right on the route and provided an adequate, though not perfect lunch, with exceptionally friendly service from its new landlord.

Chatter, imperfect map-reading and inattention to the book's instructions almost set us off on the wrong road after lunch - and all on fruit juice at that.

You need to walk along to the junction with the Pickworth road, and turn left past the primary school - or take the narrow lane between houses just before the school sign on the main road.  In any case take the road out of Great Casterton past the school and walk along this for a good mile until you reach Mounts Lodge Farm.  Opposite here a bridleway leads to the left - almost due west.  The path was pretty muddy - puddle-dodging skills honed while you walk.

After a few hundred yards, at the end of the first very big field, we turned right along a grassy track.  We continued along this, ignoring any tracks to the right or left, and made our way more or less north towards Pickworth. The signing around here is pretty poor.  Just opposite the point where the path meets the road is this medieval arch.

The arch, on private land is all that remains of a church from the 12th, 13th or 14th century.
The lime-kiln is also on private land, and almost invisible in the summer.
We turned left along the road, and walked past the first footpath sign near Manor Farm, and past the limekiln, to find the path we needed, which goes off to the right at a bend in the road.  Time for another coffee-break, before tackling the remaining three or four miles.

The path is wide and clear, and we had no trouble finding the point where we turned left across a field towards a strip of woodland marked as Little Sutie on the map. Through this was where I had wandered last time i walked here. The map shows the path diverging slightly from the wood on the right hand side.  This time we followed the edge more closely and we found the path through the quarry with no difficulty. Once at the quarry the bridle way is clearly posted.

The path from the quarry towards Clipsham provided a few earlyish blackberries today. No problems following the route from here as for most of the way it runs between hedges,  and the village is clearly visible.

We walked along the Castle Bytham road for about a mile to get back to the Yew Tree Avenue. Fourteen miles on the clock today. 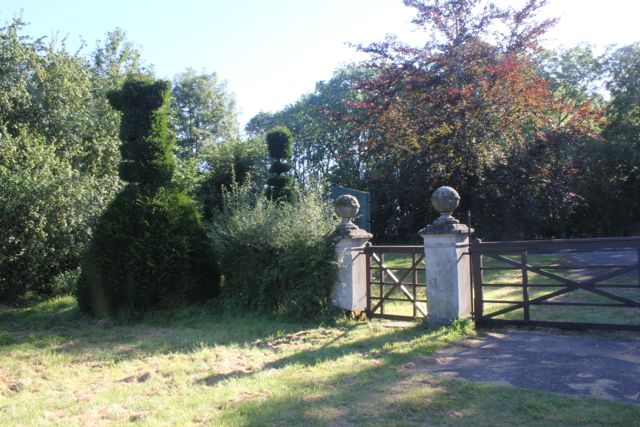 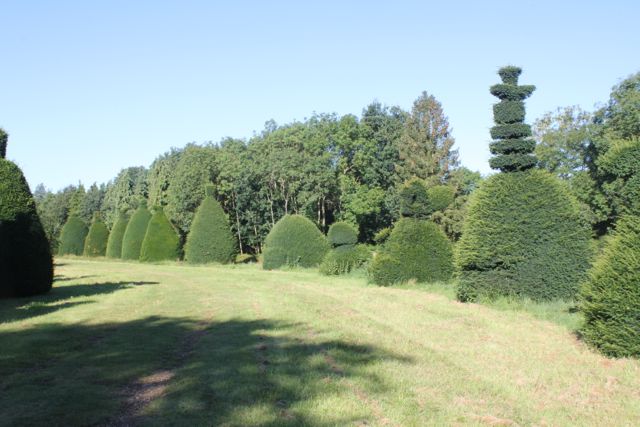 Map and details
Posted by aliqot at 2:48 PM